Pier Angeli, 19 June 1932-06-19 ~ 1971-09-10, was an Italian-born television and film actress. Her American cinematographic debut was in the starring role of the 1951 film Teresa, for which she won a Golden Globe Award. Twenty years later, she had been chosen to play a part in The Godfather, but died before filming began. She had romantic relationships with actors Kirk Douglas and James Dean before going on to marry Vic Damone.

At the age of 39, despondent and lonely, Angeli was found dead in her home at 355 S. McCarty Dr. in West Los Angeles, of an accidental barbiturate overdose. She is buried in the Cimetière des Bulvis, in Rueil-Malmaison, Hauts-de-Seine, France. 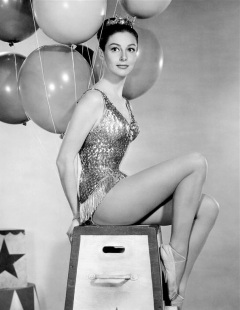